The board of the Public Investment Fund, or PIF, resisted the move as too risky, but soon found itself overruled by an even higher authority, Prince Mohammed’s father,

according to an October podcast by the PIF governor,

Without sufficient liquid assets to satisfy the prince’s desire to move quickly, the PIF prevailed on the Saudi central bank to give it tens of billions of dollars, despite concerns from government officials that doing so might undermine the local currency’s peg to the dollar, according to people familiar with the matter. Prince Mohammed, the PIF chairman, personally picked many of the stocks the fund bought, fast-tracking the purchases through an ad hoc committee that bypassed normal decision-making channels, these people said.

The $35 billion deployed by the PIF quickly turned into $49 billion when markets rallied, Mr. Rumayyan said on the podcast.

But the episode escalated a power struggle over the future of the world’s seventh-largest sovereign-wealth fund, now with $600 billion under management, according to interviews with current and former employees, consultants and other people familiar with the fund.

On one side is 37-year-old Prince Mohammed, the fund’s chairman since 2015, who dabbled in stock picking as a youth and has led the PIF into investing in videogame makers, luxury-car manufacturers and an English soccer team. On the other is a growing group of professional financiers who are trying to put guardrails around how the kingdom’s oil wealth is spent.

The outcome will help shape the future of Saudi Arabia’s economy. The kingdom, flush with cash from higher oil prices, is aiming to grow the PIF into a $2 trillion behemoth by 2030. 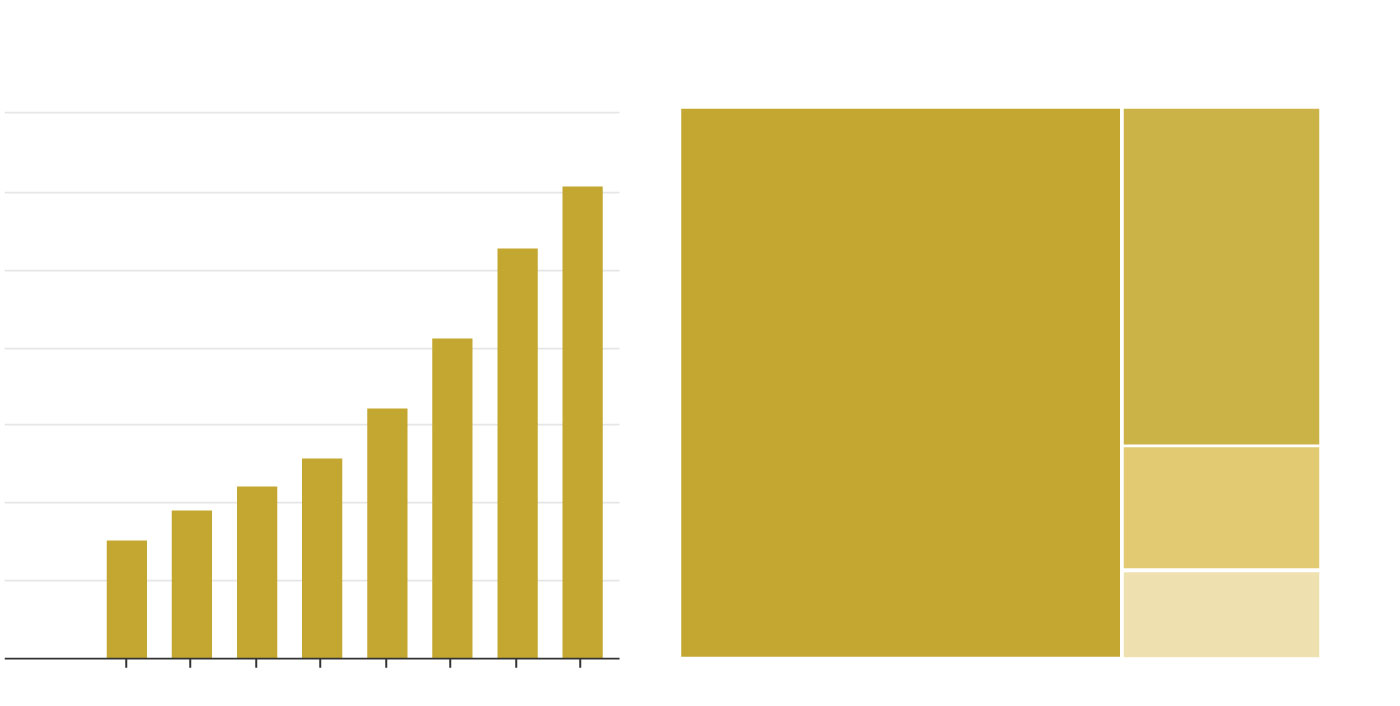 PIF’s assets under management by region, as of 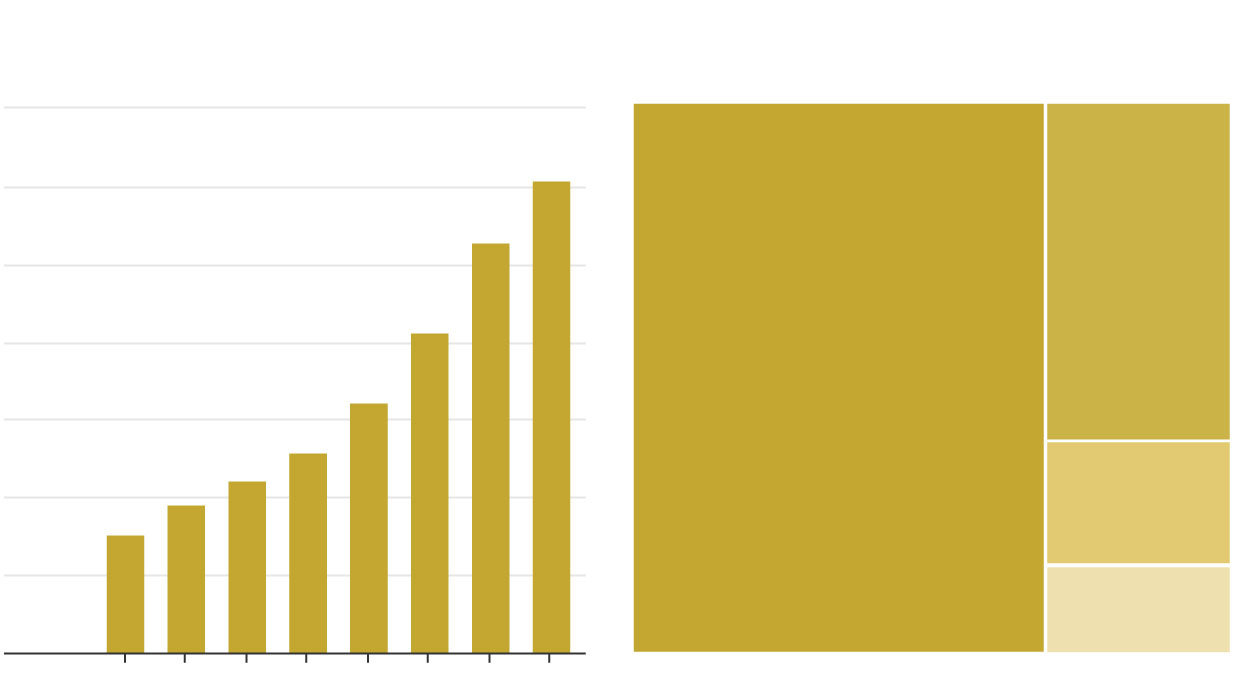 PIF’s assets under management by region, 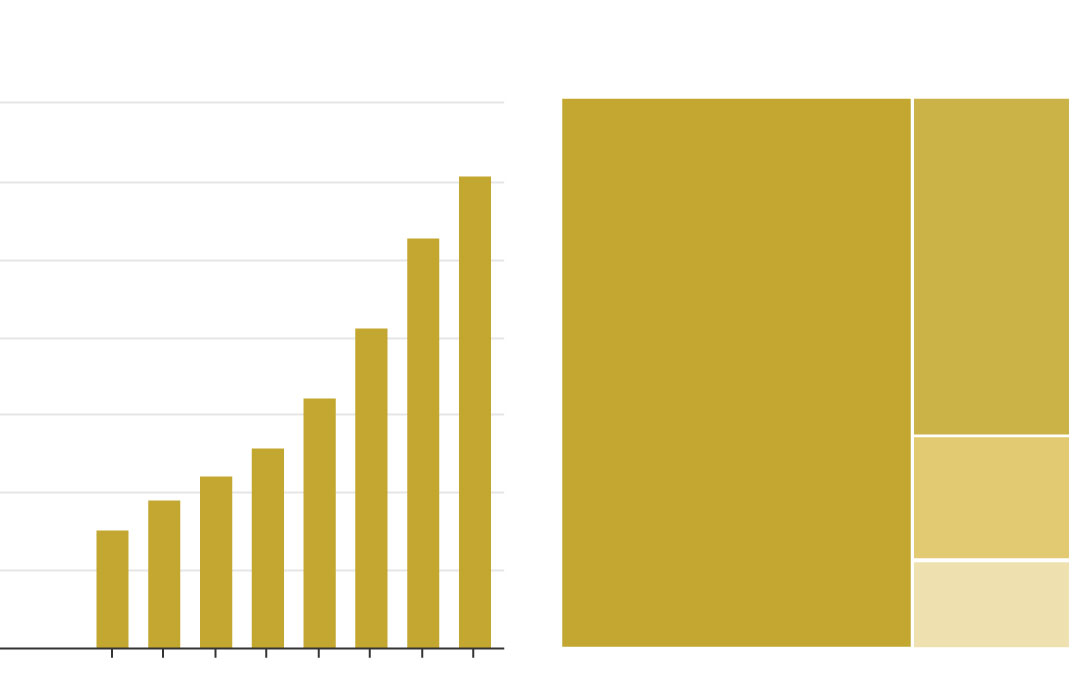 PIF’s assets under management by 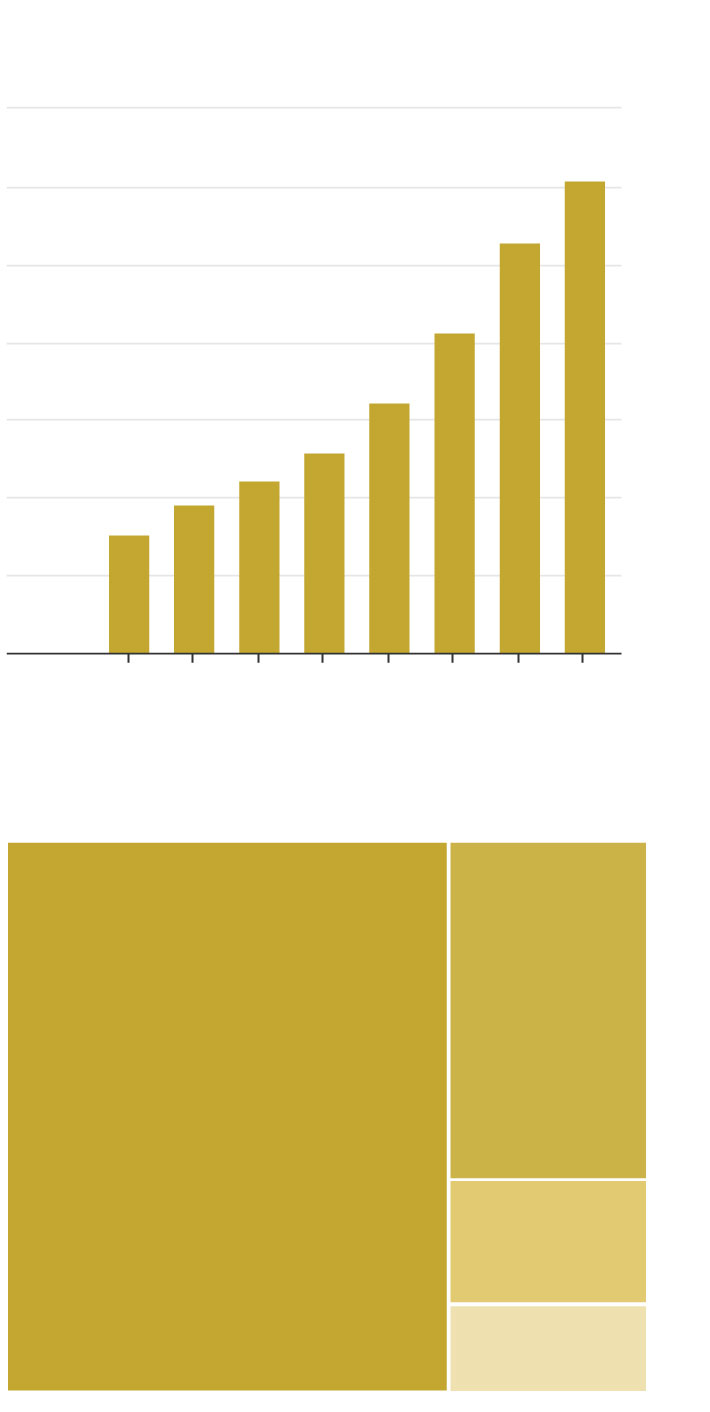 PIF’s assets under management by region, as of

PIF’s assets under management by region,

The PIF has built up a buffer of cash and liquid securities—rainy-day funds for investing opportunistically—and hired more compliance and finance professionals, including a former finance-ministry official who oversaw the government’s transition into one of the biggest debt issuers among emerging markets.

The kingdom’s professional financiers are trying to maintain fiscal discipline even during an oil boom, with crude prices near $100 a barrel for much of last year and economic growth estimated by the International Monetary Fund of more than 7.6%—making the country one of the best economic performers globally in 2022.

Three months ago, the fund signaled that its freewheeling days were behind it when it opened its finances publicly for the first time as part of a $3 billion bond sale. In a statement, the PIF said it had “world-class governance.”

“As a portfolio expands, inevitably, it has to professionalize,” said Robert Mogielnicki, resident scholar at the Arab Gulf States Institute think tank in Washington, D.C., adding that governance at the PIF seems to have improved. Even so, he said, there are very few, “if any, institutional safeguards to absolutely prevent” top-down interference with established investment procedures.

The Saudi Royal Court didn’t respond to requests for comment.

In a statement via lawyers, the PIF said it rejected “any suggestion that the decision-making or conduct of the board of PIF is unduly influenced (or influenced in any way contrary to the principles of good governance) by the crown prince.” The fund said it denied that “investments (wrongly) attributed…as being at the behest of the crown prince have underperformed.” It didn’t respond to questions about specific investments.

Under Prince Mohammed’s stewardship, the PIF has said it made a 12% annual return from September 2017, when it launched a new strategy to increase returns and drive the kingdom’s economic diversification, up to the end of 2021. That is higher than the 9% average among sovereign-wealth funds tracked by New York-based data firm Global SWF, and compares with a 3% annual return the PIF disclosed from 2014 through 2016.

By its count, the fund has created more than 500,000 jobs and established 66 new companies to develop new industries in an economy long largely dependent on oil.

The PIF said all its investments are consistent with its published strategies, including investing in 13 priority sectors of the Saudi economy. Deals are reviewed by both a board investment committee, which includes nonexecutive directors, and a management investment committee, according to the fund’s prospectus, and the PIF board has final authority over investment decisions.

Consultants and people who work with the PIF said it is like any company or investment fund around the world that is dominated by a big personality or deal maker, and much of what the prince—or the governor, Mr. Rumayyan—recommends is based on a broader economic rationale.

A case in point: Prince Mohammed’s interest in electric vehicles is well-known. In 2018, the PIF began putting money into EV startup Lucid Group Inc., investing $3.8 billion in all. Its 60% stake is now worth roughly $7 billion. Meanwhile, the California-based car maker has broken ground on a factory in the kingdom slated to create jobs for the Saudis, a win for the PIF’s dual strategy of investing for financial return while developing the domestic economy.

Other times, the crown prince’s interests have led the PIF into investments like Noon.com, an e-commerce website that planned to take on

In the past two years, Noon suffered losses of $520 million, according to the PIF prospectus. The value of PIF’s current stake or whether it has invested further couldn’t be determined. Noon declined to comment.

In 2018, after Prince Mohammed, an avid gamer, tried an augmented-reality product from a buzzy startup called Magic Leap, the PIF invested $400 million. At the time, the investment valued Magic Leap at more than $6 billion. By 2021, when the PIF took a majority stake, the company was struggling financially and the valuation had slipped to $2 billion.

The prince’s biggest bet, a $45 billion commitment in 2017 to SoftBank’s Vision Fund has lagged behind the overall market and hasn’t produced the flurry of foreign investment by technology companies into the kingdom envisioned by the PIF leadership.

The PIF invests domestically in dozens of new companies and real-estate developments such as a 75-mile long skyscraper, as well as internationally in private equity and stocks and sports initiatives such as the Newcastle Football Club and LIV Golf.

“Our results speak for themselves,” the PIF said. “PIF is helping drive the transformation of the Saudi economy and generating strong financial returns and economic opportunities for the people of Saudi Arabia, our ultimate stakeholders.”

Saudi officials said Prince Mohammed listens to his advisers and sometimes argues with them about how best to manage the government’s finances and the PIF’s investments. But he has the final word in both arenas, they said.

“He’s very passionate about the economy, and sometimes we spend many hours arguing, including with His Royal Highness,” said Finance Minister

a PIF board member who has championed a series of moves to shape how PIF money is spent.

In an interview, Mr. Jadaan called the 2020 central-bank transaction an extraordinary one-off episode.

The PIF faced outside pressure to put in place guardrails shortly after Prince Mohammed revamped the fund’s strategy in 2017 to accelerate its growth. In early 2018, IMF officials visited Saudi Arabia on a fact-finding mission before the institution’s annual report assessing each country’s financial health. The IMF pressed Saudi officials to be transparent about investments and debts at its state-owned companies to give the international community a clear picture of the kingdom’s overall finances, according to people familiar with the discussion.

How should Saudi Arabia structure its sovereign-wealth fund? Join the conversation below.

A meeting at the PIF turned fractious and devolved into shouting when PIF’s Saudi executives took issue with some of the IMF’s questions, these people said. That relationship later improved, they added, but the PIF never shared all the information the IMF requested.

The IMF said it has very good relations with the Saudi authorities and discussions have always been very open and constructive. “Great strides have been made in improving transparency,” it added.

In the spring of 2018, Prince Mohammed asked Mr. Rumayyan to buy a stake in

spending $2 billion on shares available on the public markets, people familiar with the request said.

for a discussion about further investment, a meeting that became the precursor to a set of tweets Mr. Musk posted, saying he was taking the company private and had “funding secured.” The Securities and Exchange Commission later sued Mr. Musk for allegedly fraudulent statements and he settled the case, while denying wrongdoing.

Tesla’s shares later rocketed, and the PIF’s stake in the company would now be worth roughly $11 billion if it had simply held on to the original investment.

There were times the fund’s employees and board tempered the crown prince’s impulses. Despite Prince Mohammed’s close relationship with

the PIF’s finance experts dissuaded the prince from investing in SoftBank’s second Vision Fund vehicle, launched in 2019, pointing to bad bets the Vision Fund made the first time around, like

according to people familiar with the process.

In August 2019, Mr. Son also pitched to the PIF a sensitive idea at the heart of Saudi Arabia’s role as the guardian of Islam’s holiest sites. The proposal aimed to make more money from the pilgrims in the holy city of Mecca and double the number of annual visitors to 20 million by 2030, according to a pitch deck viewed by The Wall Street Journal.

The pitch called for both SoftBank’s second Vision Fund and Saudi Arabia to invest into the venture. It planned to raise loans from Greensill Capital, the now insolvent trade-finance firm, and spend $40 billion upgrading Mecca using materials made in factories run by Softbank-backed construction startup Katerra, also now defunct.

Prince Mohammed was intrigued by the Mecca idea. But the proposal never made it past the PIF’s investment committees, according to people familiar with the pitch, with some Saudi officials saying it would amount to commercializing and overdeveloping Islam’s most sacred place. SoftBank declined to comment.

The PIF said the fund “has a robust investment process and governance framework, commensurate with other leading asset managers around the world.”

Still, the prince’s role remains something of a wild card.

In 2021, when former President

Mr. Kushner’s fund, named Affinity, aims to link Persian Gulf money with Israeli businesses, especially its technology sector. But Saudi Arabia has no diplomatic relations with Israel, and the PIF has ample exposure to the global tech sector.

Some PIF committee members argued that Mr. Kushner didn’t have a long track record in this sort of business, the people familiar with the matter said. Mr. Kushner, who declined to comment via a spokesman, is known for real-estate investments in the New York City area. In Affinity’s pitch to prospective investors in Saudi Arabia, it noted Mr. Kushner’s involvement in key Trump administration diplomatic initiatives.

The crown prince won that argument. The PIF eventually made the deal, people familiar with that investment said, sending Mr. Kushner $2 billion.

Write to Rory Jones at rory.jones@wsj.com, Stephen Kalin at stephen.kalin@wsj.com and Summer Said at summer.said@wsj.com

How Gautam Adani Made (and Could Lose) a $147 Billion Fortune

U.K. Hit by Biggest Strikes in a Decade